Home2017State of the European Union
2017/Americans in the EU

State of the European Union

The scene outside in the spring Tuscan sun was pure Brussels: black limousines, heavy security, expensive black suits. Inside, in the Salone dei Cinquecento of Florence’s Palazzo Vecchio, it was pure Italian Renaissance: a glorious ceiling of 39 panels painted by Giorgio Vasari, statues by Michelangelo and Bandinelli, and banks of flowers. But the message of the seventh State of the Union conference, organized annually by the European University Institute, was more akin to the Gettysburg Address. 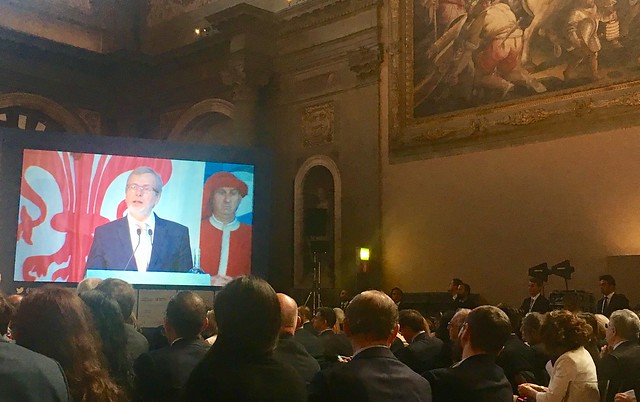 Over the years, the State of the Union has become a reference point for policy-makers, business leaders, journalists, academics and representatives of civil society to debate the EU’s successes, failures and challenges. This year, the list of speakers was impressive. Presidents, current and former Prime Ministers, Foreign Ministers, the President and Vice President of the European Commission, the Chief EU negotiator during the Brexit talks, Members of the European Parliament, journalists and academics joined EUI President Renaud Dehousse and several EUI faculty and researchers to reflect on the most pressing issues facing Europe today. 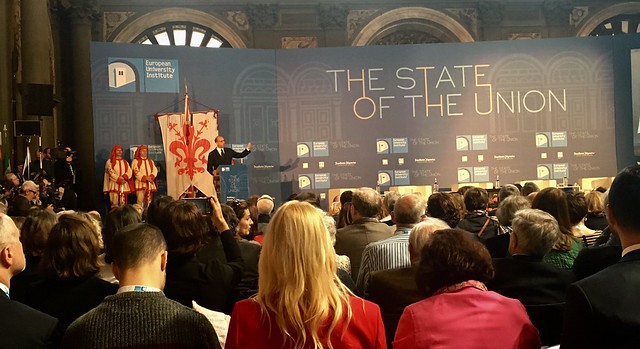 The theme of this year’s program, by invitation only, was “Building A People’s Europe.” The list of issues facing the EU was long and oft-repeated over two days: terrorism, rising economic inequalities, high rates of youth unemployment, changing migration patterns, crises in the Middle East and Africa causing huge influxes of refugees, the rise of populism and shifting electoral politics, increases in human and drug trafficking, uncertainties after Brexit as to whether other member states will seek exit, and social cleavages resulting from rapidly changing demographics. 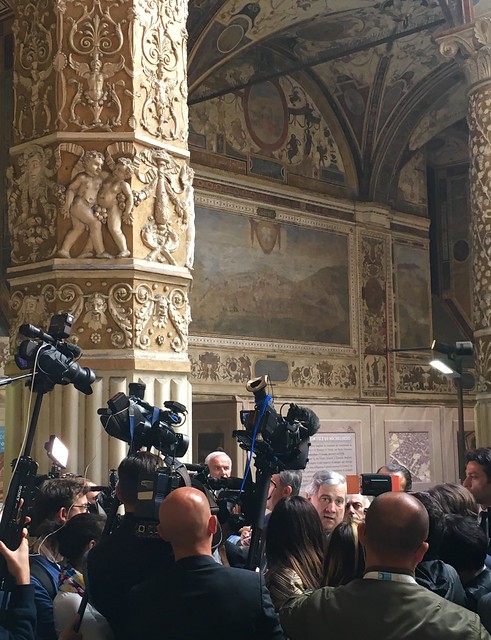 The refugee crisis in particular drew commentary from many speakers. Jean-Claude Juncker, President of the European Commission, praised Italy for salvaging the dignity of the EU during the refugee crisis. “Italy and Greece should not bear burdens that should more appropriately be shared with other European countries merely because of their geography,” he stated, as the audience responded with hearty applause. Pietro Grasso, President of the Italian Senate, emphasized that immigration and refugee issues should no longer be considered temporary structural problems to be solved. “Migration is a long-term human trend that will not end, and in the EU it must be addressed as a permanent governance issue,” he stated. “Accepting refugees at Europe’s borders is not an act of benevolence. It is an obligation.”

The attitude of civil society members in attendance may best have been summed up by a nun, sitting next to me, who works with the homeless Roma community in Florence. “Can the European Union in this period of austerity and uncertainty restore hope by responding to its citizens’ needs for work and housing?” she asked.
The answer may have come from Rainer Bauböck, Professor of Social and Political Theory at EUI, who delivered the State of the Union Address.

“The European Union is at a crossroads,” Bauböck stated. “For the first time, a member state successfully sought to break away. The refugee crisis is straining our resources and our identity. As has happened in other parts of the world in previous times, we are asking ourselves whether a loose confederation of states can come together and unify in a time of crisis.”

Abraham Lincoln, standing at the Soldiers’ National Cemetery in Gettysburg, Pennsylvania on the afternoon of November 19, 1863, would have empathized.