From 27 to 29 April 2022, the Fulbright Commission in Brussels facilitated the participation of 25 current American Fulbrighters and 25 European alumni of EU-funded exchange programs in the 2022 EU-US Young Leaders Seminar on the Future of Democracy.

The event marked the fifth iteration of the EU-US Young Leaders Seminar, which was first held in April 2017. The initiative, jointly funded by the European Union and the United States, provides a unique opportunity to discuss some of the most important global challenges and the creation of strong transatlantic people-to-people connections. Since its inception, over 250 alumni of U.S. and EU-funded educational exchange programs have participated in Young Leaders Seminars dedicated to topics such as migration, the future of work, disinformation and media literacy, and the future of cities.

Co-organized by the Delegation of the European Union to the United States, the U.S. Department of State, the German Marshall Fund of the United States, the Fulbright Commission in Brussels, and the Directorate-General for Education and Culture of the European Commission, this year’s program included panel discussions with speakers from both sides of the Atlantic, including experienced professionals from EU institutions, think tanks, and academia, as well as a memorable visit to the residence of the U.S. Ambassador to the European Union.

The EU-US Young Leaders Seminar opened on Wednesday evening with a networking dinner in the heart of Brussels’ European Quarter. Participants, who travelled from across Europe to attend the seminar, were welcomed by Erica Lutes of the Fulbright Commission in Brussels, Alexandre Polack of the Delegation of the European Union to the United States, and Colin Scicluna of the European Commission. 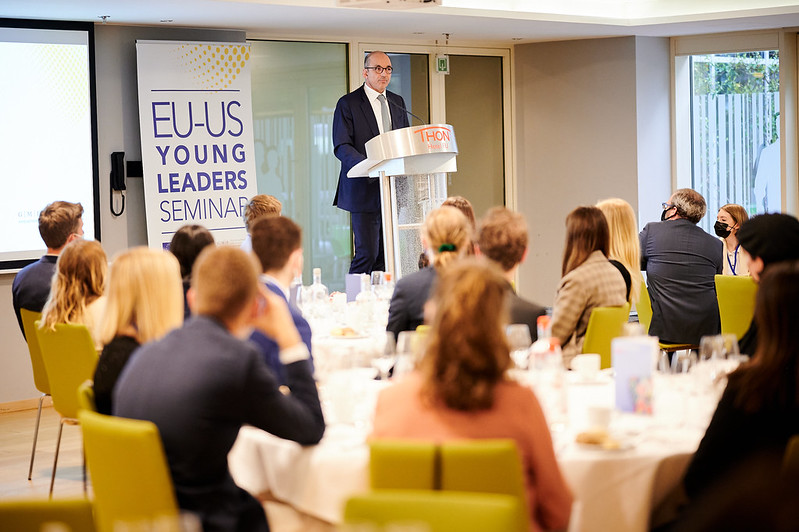 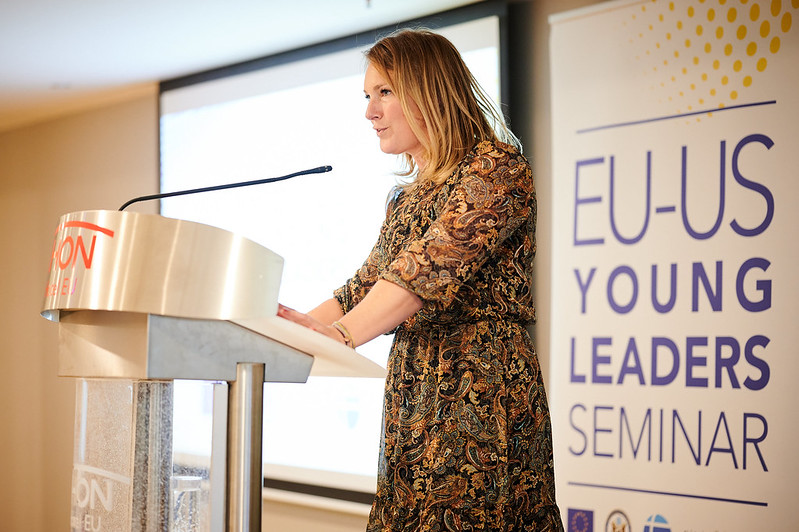 The seminar kicked off in earnest on Thursday morning with a welcome from Stefan Schleuning, Head of Unit FPI.4, Industrialised Countries & Foreign Policy Support and Alexandre Polack, First Counsellor, Political, Security and Development section, Delegation of the European Union to the United States.

The European Commission’s Director-General for Education, Youth, Sport and Culture, Ms. Themis Christophidou, then delivered opening remarks to the assembled participants. In her remarks, she highlighted the relevance of exchange programs like the Fulbright Program, Erasmus+, and the Marie Skłodowska-Curie Actions and the importance of young leaders to the transatlantic relationship. Her remarks resonated with the diverse group of participants, all either current participants in or alumni of U.S. or EU-funded exchange programs. 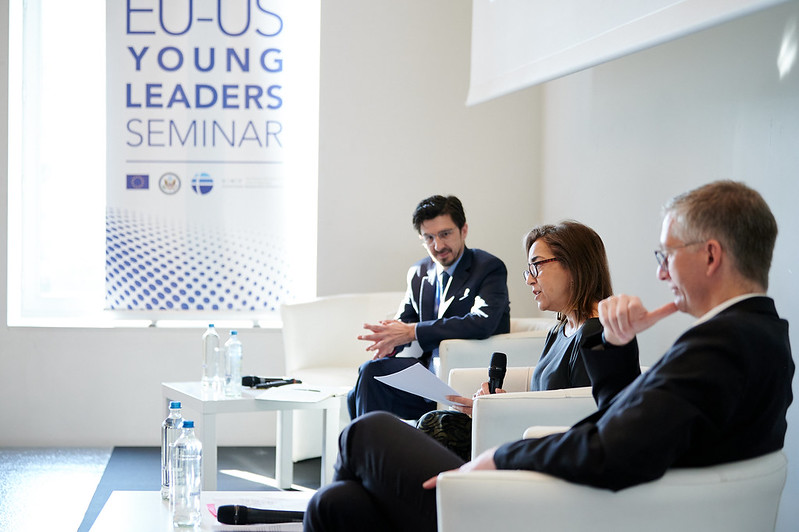 Over the course of the seminar, a series of panels and power conversations introduced seminar participants to the challenges and opportunities facing democracies on both sides of the Atlantic.

On Thursday morning, participants first heard from Patrick Costello, Head of Unit for Democracy and Electoral Observation, European External Action Service and Zsuzsanna Szelenyi, Director of the CEU Democracy Institute. Costello and Szelenyi reflected on the state of transatlantic democracy, laying the foundation for the discussions to come. Panelists discussed the danger that authoritarian threats, political polarization, disinformation, and widening social inequalities pose to democratic values.

For the following panel discussion on “Upholding the Rule of Law”, moderator Alexandre Polack welcomed to the stage Monika Ladmanova, Advisor to the Vice-President Vera Jourova, and Sacha Garben, Professor of European Legal Studies at the College of Europe. Ladmanova and Garben spoke about challenges to the rule of law on both sides of the Atlantic, ranging from the weakening of democratic checks and balances and threats against judicial independence to unequal access to legal representation and crimes against minority groups.

Following an in-depth discussion on the rule of law, participants prepared to debate the relationship between technology and democracy. Gamely representing the two sides of the debate were Nad’a Kovalčíková, Senior Analyst at the EU Institute for Security Studies, and Lutz Güllner, Head of Strategic Communications (Foreign Information Manipulation and Interference) of the European External Action Service. 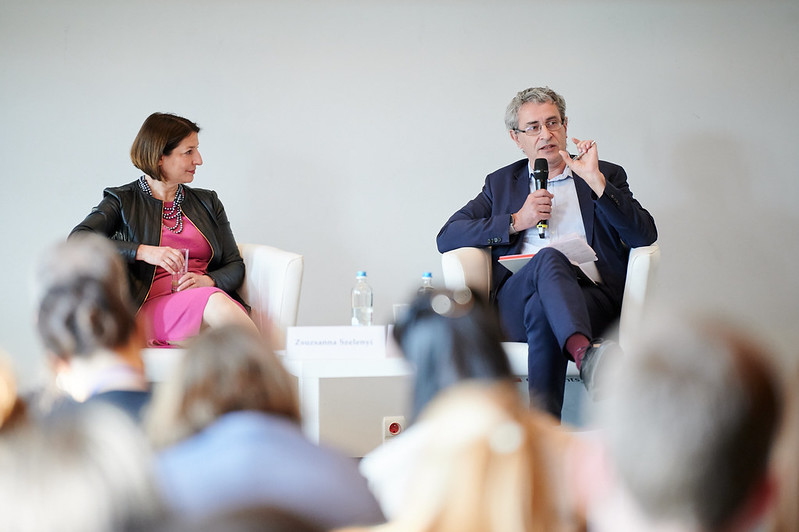 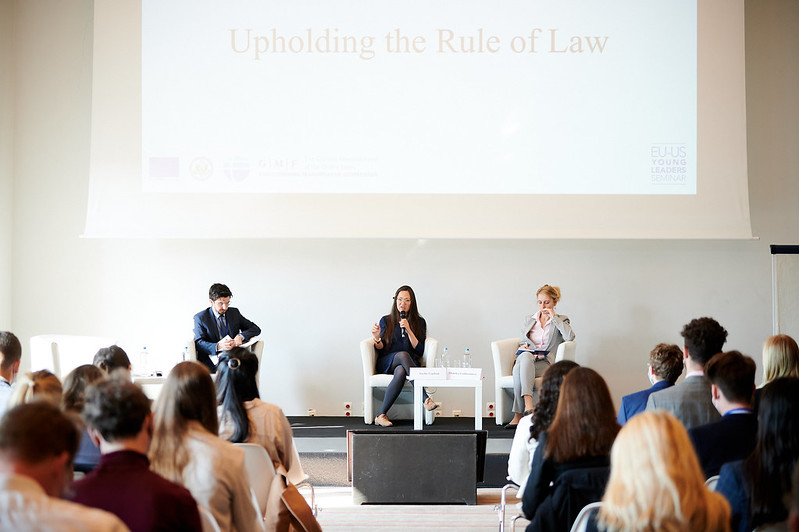 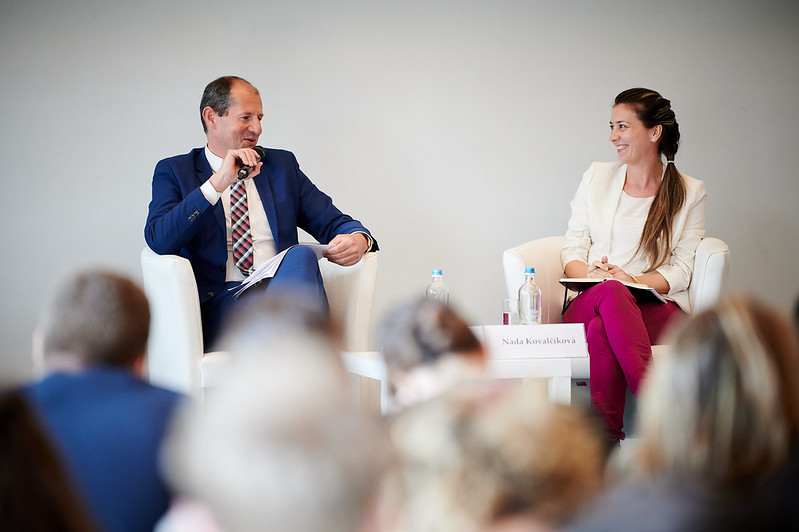 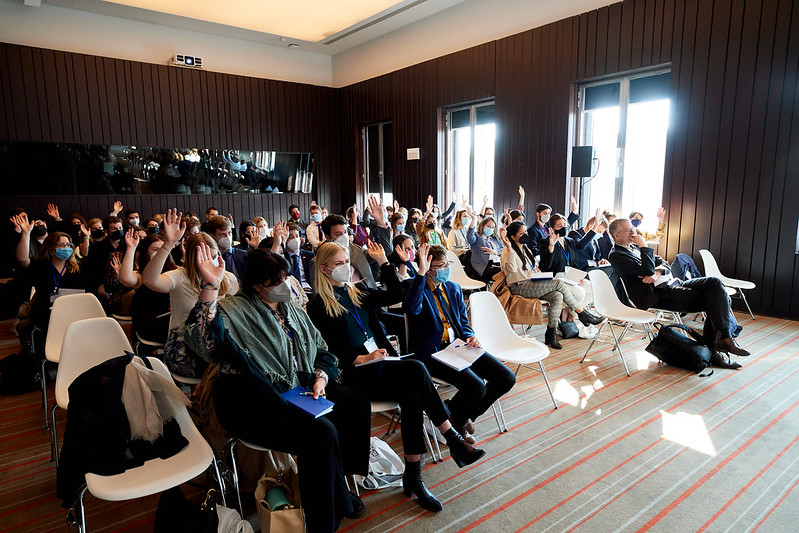 Following a networking lunch, Dr. Ian Lesser of the German Marshall Fund joined participants for a conversation about the legacy of the Marshall Plan.

Participants then heard from Gwendolyn Rutten, a member of the Flemish Parliament and the current mayor of Aarshot, and journalist Caroline de Gruyter in a panel discussion on “Rebuilding Trust in Public Institutions”. The panelists discussed the importance of trust in public institutions as well as the challenges that local, regional, and national governments face in building and sustaining citizen trust. 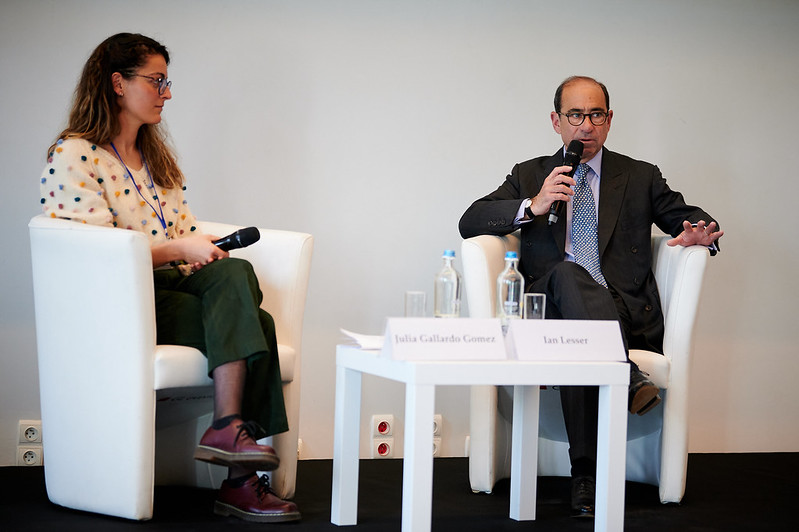 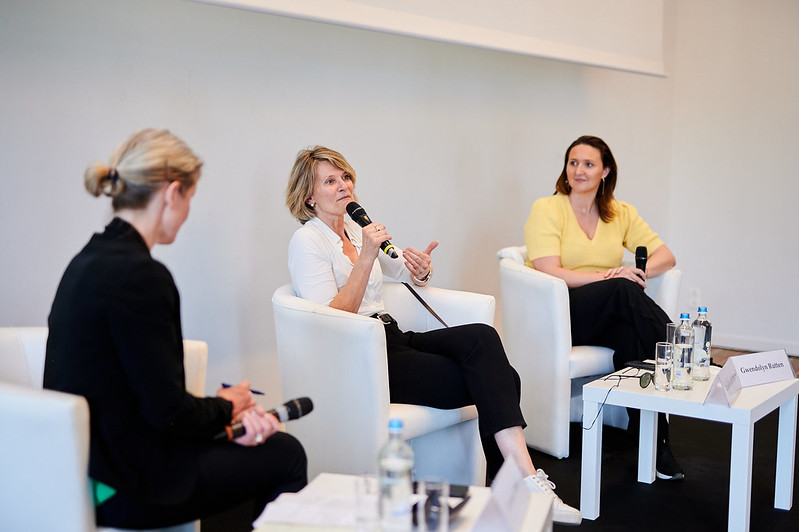 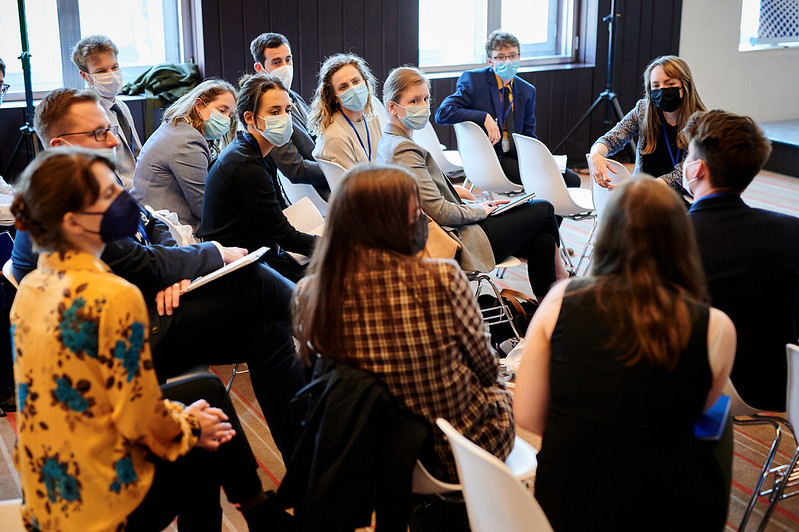 With the panelists’ words in mind, participants were then divided into small groups, with a challenging assignment: to envision the Marshall Plan of the twenty-first century.

After a couple hours of brainstorming, seminar participants headed to the residence of the U.S. Ambassador to the European Union for a reception hosted by Ambassador Mark Gitenstein. Participants were joined by seminar organizers, speakers, and alumni of previous EU-US Young Leaders Seminars. 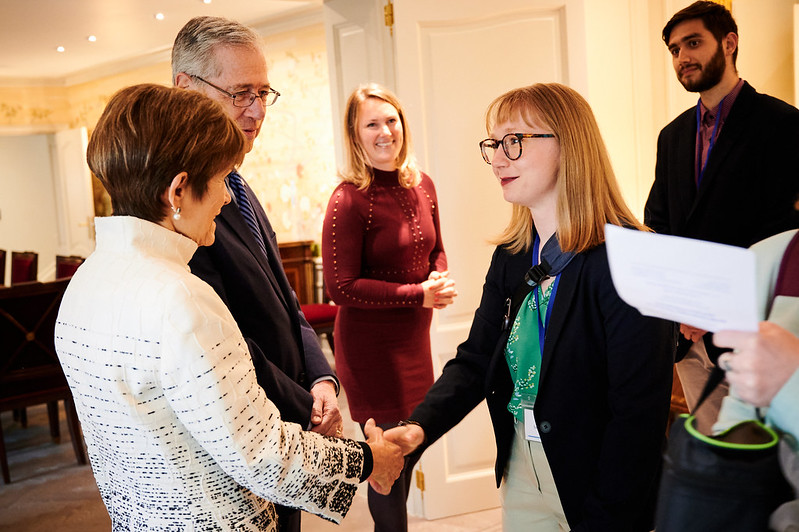 On Friday, participants returned to the seminar venue for a final day of panel discussions, breakout sessions, and presentations.

The day started with a discussion with Desa Srsen, Deputy Head of Cabinet of the European Commission’s Vice President for Democracy & Demography. Srsen discussed the hallmarks of a strong, resilient democracy and the ways in transatlantic cooperation can further strengthen democratic institutions.

Then, Erica Lutes moderated a panel on “A Demographically Diverse, Digitally Native Civil Service System,” which welcomed Luis Loureiro de Amorim, Head of Unit at the European Personnel Selection Office and Gilberto Morishaw, the Head of Impact, Equity and Inclusion at Kolektivo. Panelists discussed the importance of representation within the civil service as well as barriers to inclusion.

The last session of the morning, “Outlook for 2022: The Transatlantic Comeback?” featured Oana Popescu Zamfir, the Director of GlobalFocus Center and a Fellow at the Institut für die Wissenschaften vom Menschen, and Jacob Kierkegaard, Senior Fellow at GMF. Here, panelists addressed the latest developments in the transatlantic relationship: namely, the continued impact of the COVID-19 pandemic and the new threat posed by the Russian invasion of Ukraine. 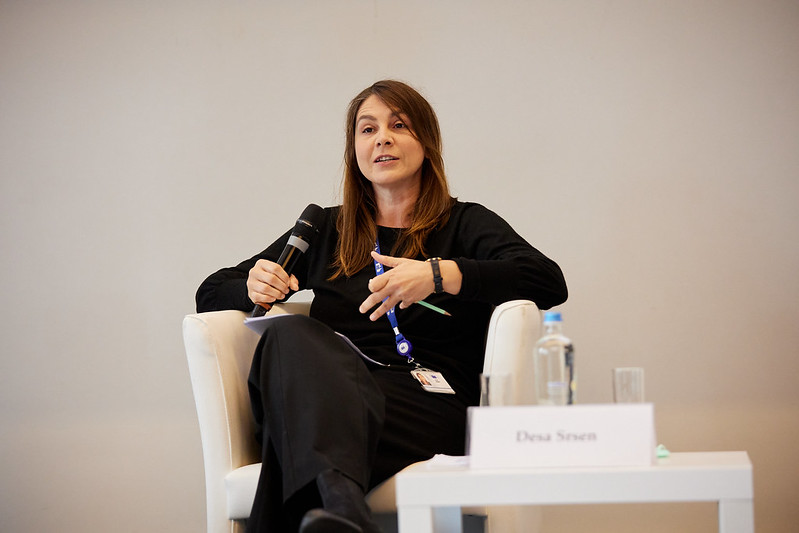 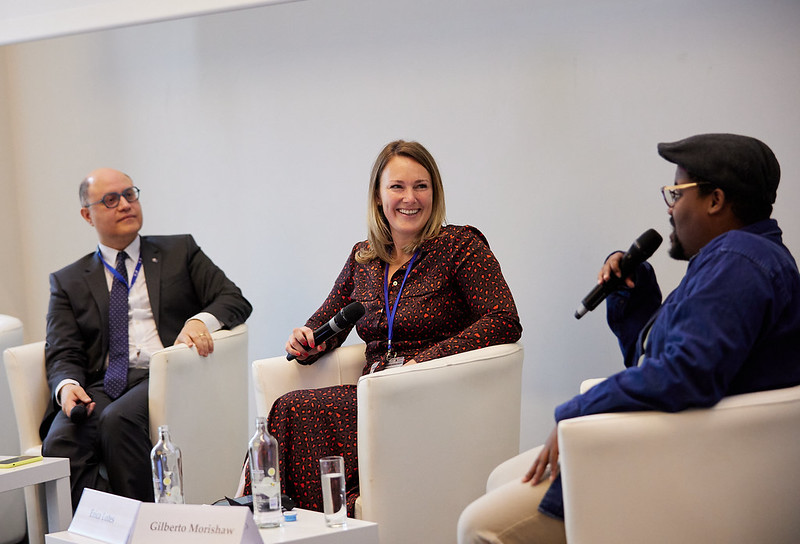 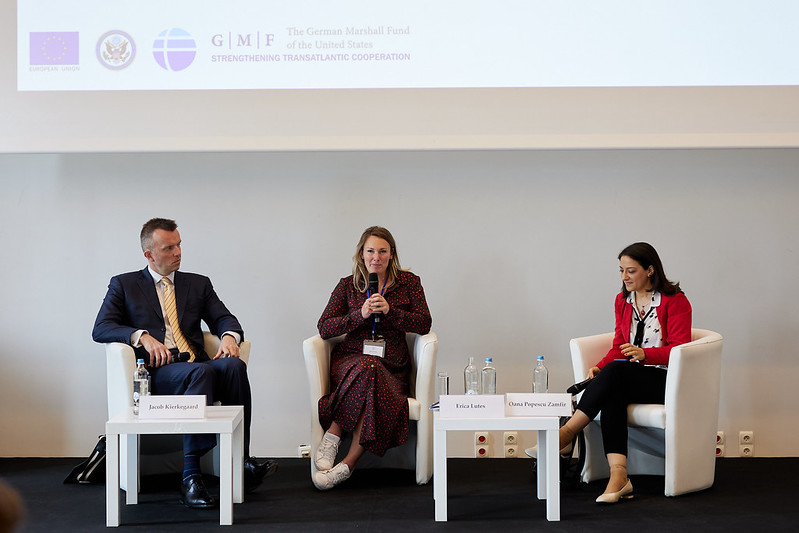 After a networking lunch, participants came back together in groups to prepare their Marshall Plan 2.0, adding elements from the morning sessions and honing their proposals for a panel of judges.

Each group was then invited to present and answer questions about their plans in front of a panel of judges, Shark Tank-style. The “Sharks” included Dr. Corinna Hörst of the German Marshall Fund of the United States, Erica Lutes of the Fulbright Commission, Jamie Martin of the U.S. Mission to the European Union, and Alexandre Polack of the Delegation of the European Union to the United States. After a lively presentation and debate amongst the judges, the winning plan — “A Marshall Plan for the People” — was announced. 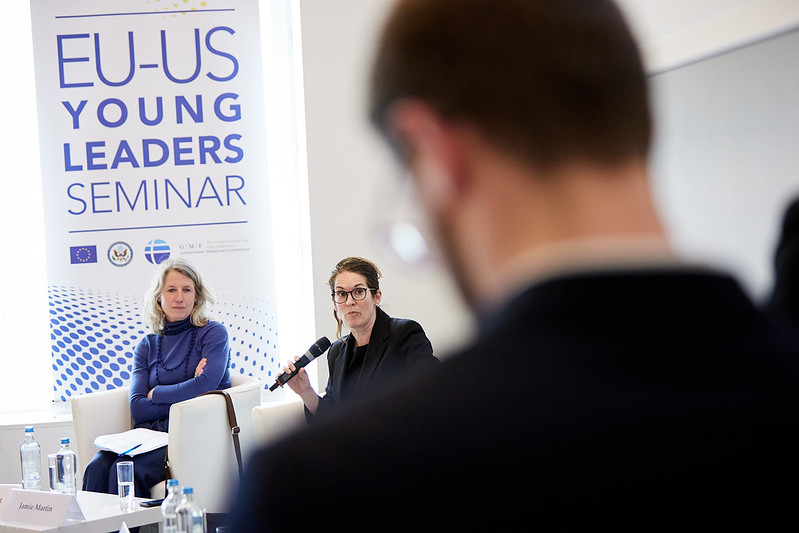 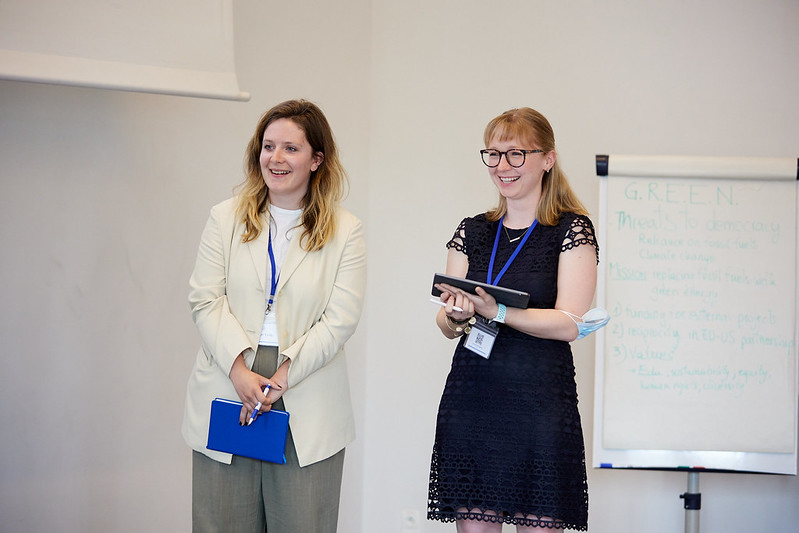 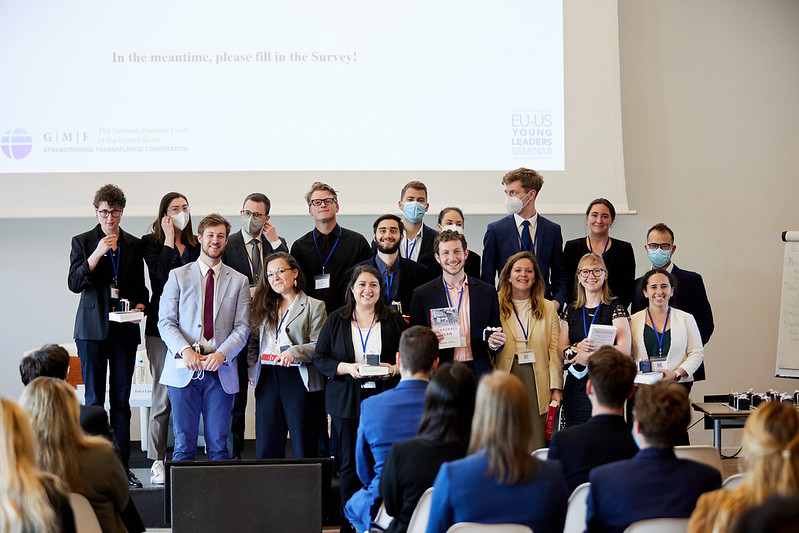 Participants were all given boxes of traditional Belgian chocolates, and the members of the winning team received book prizes.

Seminar organizers then invited Elia Tello, Minister Counsellor for Public Affairs at the U.S. Mission to the European Union, to deliver the seminar’s closing remarks. Tello highlighted the importance of the relationship between the United States and the European Union and spoke to the crucial shared effort to promote and sustain democracy at home and abroad. 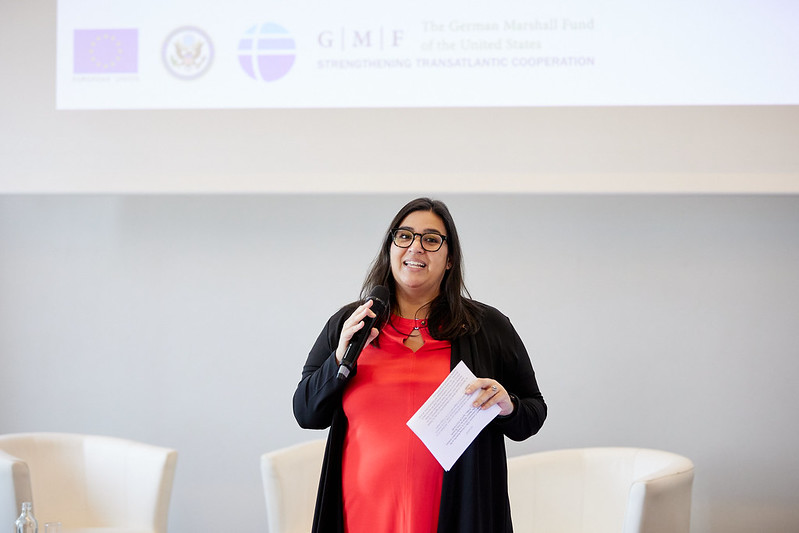 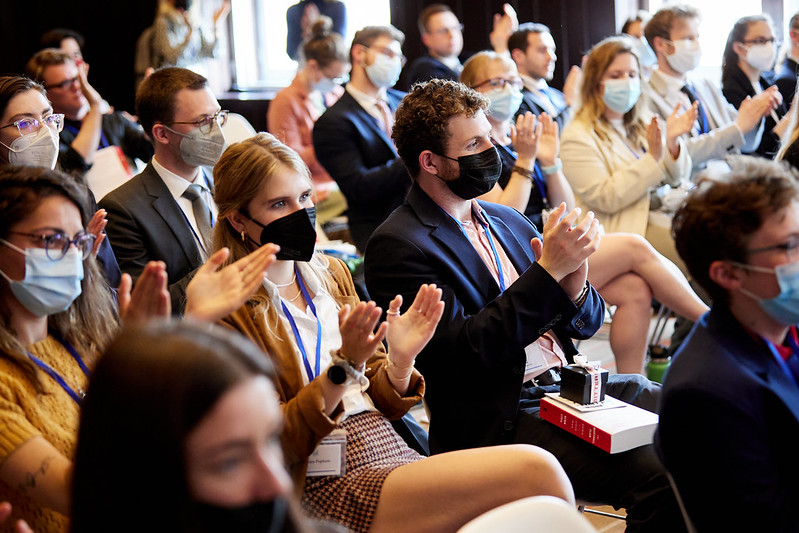 The seminar complete, participants were treated to fresh Liège waffles and a sunny afternoon to network, explore, and enjoy Brussels before returning to their respective countries the next morning.